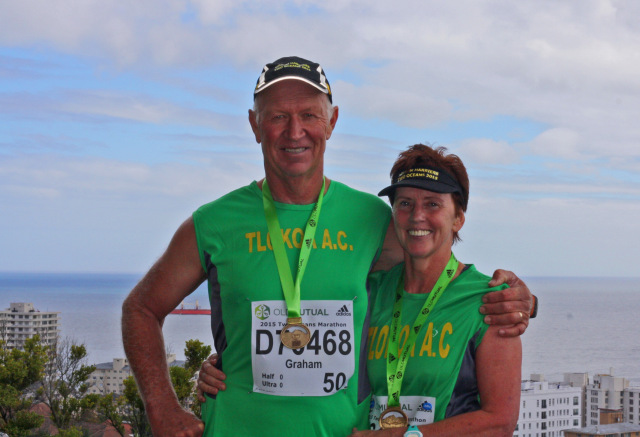 It’s 14 days since we had the opportunity of running what is billed as “the most beautiful race in the world” and I still haven’t reported back.   This is strange because runners loooove talking about their races.   It’s just that our Two Oceans Half has been overshadowed by so much – a beloved pet being killed by a puff adder, personal bests involving mountain climbing, a hectic-crazy understaffed week at work, family visits and last, but definitely not least, the surprise engagement of our elder son halfway across the world!

But more of that in another post.   Back to the race itself.   I didn’t come close to the time I should have run it in.   First of all, it took between 9 and 10 minutes to cross the line for us in the enormous E batch.   That was the first lesson learnt.   We left our apartment (10km away) an hour and ten minutes before go time.   Way too little time to deal with the traffic – we had to run the 2 km to the start and we only just got there in time.   This meant we were right at the back.   I reckon if one got there really early and wriggled one’s way to the front of the E batch it wouldn’t be so bad.  For the first 5 km it was very difficult to get a smooth pace going, it was that crowded.

Not to worry, I thought, I have my camera – relax, enjoy the surroundings and snap a few shots.   (This tactic is often confused with my normal delaying tactics, especially by the Old Goat!)   Talking of the OG, he did 2:29 which, once adjusted for the start, is under 2:20 – the half marathon time needed to crack a sub-5 marathon.

The other problem is the parking – 2km to the start but about 5km from the finish.   Shuttle buses were promised but after an hour of waiting in freezing rain and wind (and lots of dramatic conversation – obviously my death from hypothermia was imminent!) we decided that it was easier to keep warm by walking to the car.   One small problem though – we weren’t sure what direction it was!   After about half an hour we were lucky enough to hook up with a group that had a phone with gps which evetually led us to the parking.   Lesson number 2 – find parking that is close to the finish, not the start, or better still, take a taxi.    Our third stupid mistake was to not carry money, phone or warm top – we thought our car was close enough to nip back for it!   Lesson number three – run with a fuel belt and warm top.

Hopefully I’ll remember all this next year – I would love to go back and tackle the 56km ultra, but, guess what?  That also involves a sub-5 marathon.   Back to channeling Usain Bolt and coughing up my lungs while the sun rises! 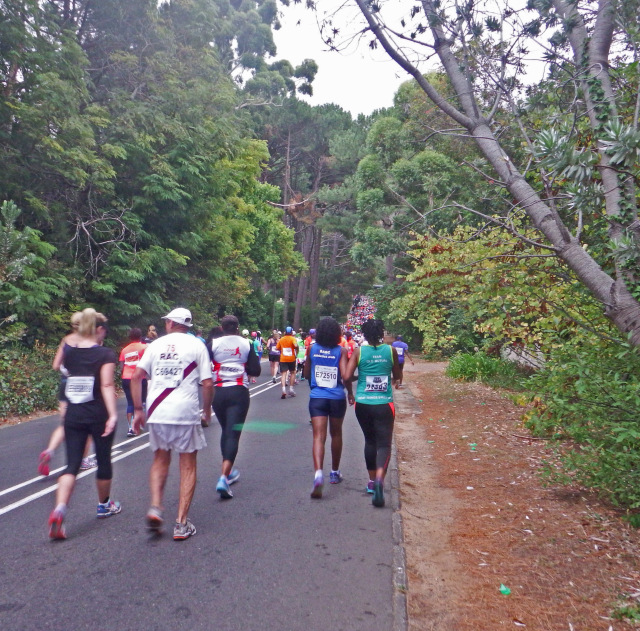